What’s in a name: Clark Park

If West Philly has a recreational hub, it’s Clark Park: 9.1 acres of grass and trees and paths and playgrounds and a hunk of stone from the Gettysburg battlefield and half of the world’s known statues of Charles Dickens.

Like Philadelphia itself, the 119-year-old park has seen its ups and downs. After a spate of improvements in the 1960s, it deteriorated for decades until neighbors, non-profits and the city’s recreation department teamed up to whip things back in shape. Today, Clark Park hosts summer festivals, a farmers’ market, and a bunch of kids who run around on Saturdays with foam swords.

It’s a safe bet that few of the basketballers and chess players and dog walkers know why their park, which marks its birthday on Jan. 18, is named Clark. Yet its namesake played so many prominent roles in Philly and beyond that it is a bit astounding that this well-loved triangle of land is almost the only thing that still bears his name.

Who was Clarence Clark?

Born in 1833, Clarence Howard Clark was, among other things:

Clark’s father, Enoch W. Clark, arrived in Philadelphia in 1837 so deep in debt from failed New England financial endeavors that it took him seven years to climb out. But climb out he did, and kept climbing all the way into the ranks of the country’s wealthiest men. His firm, E.W. Clark & Co., became one of the 19th century’s most potent financial houses, with a Wall Street arm and a string of branch offices from St. Louis to New Orleans. (The firm’s 1852 building still stands at 35 S. 3rd Street.) In the era before the young United States developed a true national currency, the firm’s exchange notes were widely used as money. And when the U.S. went to war with Mexico in 1846, the company helped finance the effort.

“In the first rank with Robert Morris and Stephen Girard,” Moody’s Magazine later wrote, “the name of Enoch W. Clark, founder of the widely known banking house of E.W. Clark & Co. will always be honored as one of those who have made the financial history of this country.” All four of Enoch’s sons eventually joined the family firm (as did Jay Cooke, who would become the great financier of the Union war effort). A 25-year-old Clarence was made partner in 1858.

When the Civil War erupted three years later, Clarence Clark and about 50 other men of means founded the Union League of Philadelphia to support President Lincoln. It became a model for similar Union Leagues around the country. (It survives to this day as a club for the Philadelphia elite, who still meet in their 1865 building at Broad and Sansom Streets.)

If Enoch Clark had prospered by the absence of a national currency, his son would grasp the opportunity presented by its arrival. Desperate for war funds, the U.S. government began to charter private banks to issue federal notes. The idea had been Jay Cooke’s, and it was no coincidence that the first national charter went to a Philadelphia group that included Cooke and Clarence Clark. Their new bank opened in 1863 under the straightforward name of First National Bank. Clark, who served as president for almost a decade, commissioned a headquarters building at 315 Chestnut Street from architect John McArthur Jr., who would later design Philadelphia City Hall. (The company remained independent until a 1955 merger; it is today part of Wells Fargo.) 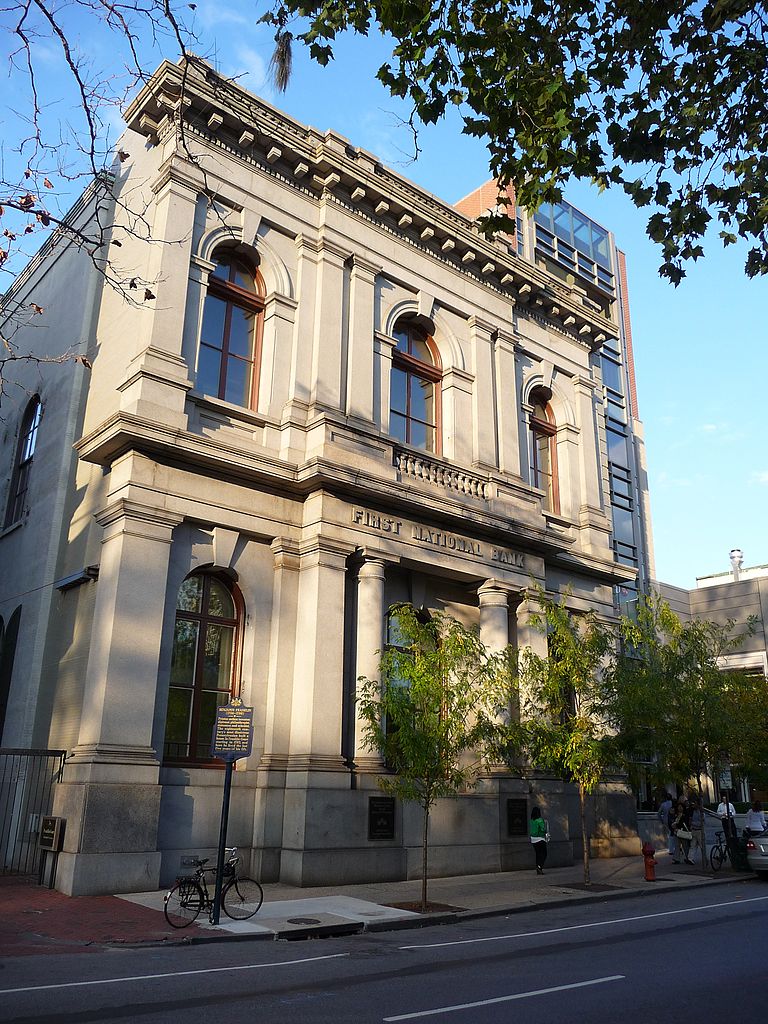 Soon after the war, Clark and some partners put together another quarter-million dollars and founded the Fidelity Insurance, Trust & Safe Deposit Company — just the second U.S. bank to offer safe deposit services. (Decades later, Fidelity abetted J.P. Morgan’s ill-starred attempt to corner the transatlantic shipping market and took large losses when Titanic sank in 1912. Still, the firm entered the Roaring Twenties with more than $1 billion under management, built a 29-story skyscraper at 123 Broad Street, and ultimately survived to 1996, when it was swallowed in a record-setting merger. Today, it is part of Wells Fargo, which occupies much of the Fidelity skyscraper.)

Clark, Cooke, and other partners launched a second insurance venture in 1868, this one capitalized at $1 million. Modestly named the National Life Insurance Company of the United States, it filled its boardroom with prominent bankers from New York, Philadelphia, and Washington. Clark, now 35, served as president. (The company survived the Panic of 1873, which brought Cooke down, but could not endure the Great Depression; it fell into receivership in 1933 and was sold to a Chicago insurance firm the following year.)

In 1870, Clark’s wife, Amie Hampton Wescott, died during childbirth. Their surviving son, Clarence Jr., was then eight years old. The following year, Clark fell ill himself. Leaving his business endeavors behind, he traveled to Europe for a lengthy recuperation.

Upon his return to Philadelphia in 1873, Clark stepped down from his jobs at First National and National Life Insurance, and returned his focus — at least for the moment — to E.W. Clark & Co. He remarried, to Marie Motley Davis, with whom he soon had a second son, Charles.

Clark, now 40, turned the attentions of the family firm to railroads, which had evolved in his lifetime from tentative experiments to the sinews of an industrializing nation. In 1881, he led the purchase of a failing Virginia railroad and turned it into the Norfolk & Western, a brawny conduit from bottomless Appalachian coal mines to, among other things, the newfangled electricity-generating plants that would begin to light the East Coast the following year. (Long entwined with the powerful Pennsylvania Railroad, the N&W merged with the Southern Railway in 1982. Today, the Norfolk Southern is the 4th-largest U.S. railroad by revenue.)

Clark also “intensified his involvement in Philadelphia’s social and civic life,” devoting time and money to a broad range of philanthropic endeavors. Some were purely charitable; he became an officer of Children’s Hospital, the Pennsylvania Society for the Protection of Children, and the Western Home for Poor Children.

Others sprang from his hobbies. An art collector and patron of the Academy of Fine Arts, Clark was the first treasurer of the Pennsylvania Museum and School of Industrial Art, progenitor of today’s University of the Arts and Philadelphia Museum of Art. An early cultivator of rhododendrons and chrysanthemums, he served as 14th president of the Pennsylvania Horticultural Society. A collector of books, Clark was an original trustee of the Free Library of Philadelphia, to which he donated land at 40th and Walnut Streets.

In 1906, the library opened its Walnut Street branch on that parcel in a French Renaissance building designed by Clarence C. Zantzinger, Clark’s nephew and namesake. Clark’s name appears on a plaque in the main entrance vestibule. (The building was young Zantzinger’s first commission; his later works include the Philadelphia Museum of Art.)

Walnut Street West Branch of the Free Library of Philadelphia. The bay window was added in the 1960s. (Davidt8/Wikipedia)

Clark had begun to purchase land in West Philadelphia in the early 1860s. He bought for development and resale, but he and his family moved there as well, presaging a general migration by the wealthy to residences outside today’s Center City. Amid the farms and the streams and the odd country estate, Clark erected a mansion; its landscaped grounds occupied the entire block bounded by Locust, Spruce, 42nd, and 43rd Streets. (After his death, the property was purchased by the Episcopal Church, which built a seminary on it. Today, the still-grassy block is the site of Penn Alexander, the UPenn-supported elementary school that has helped drive the neighborhood’s 21st-century gentrification.)

No comprehensive study exists of Clark’s development efforts, although he is generally credited as a pioneer west of 40th Street and a catalyst for West Philly’s evolution as a middle-class streetcar suburb. Among the blocks of rowhouses known to be his work are 4047-61 Spruce Street, 4013-4045 Locust Street, 4206-18 Spruce Street, 4050-66 Irving Street, and 318‐336 S. 42nd Street.

Snapshots of his other holdings may be gleaned from property atlases (see 1872, 1878, 1886, and 1892). But these provide only a glimpse of Clark’s actual influence, for he did much through partners and intermediaries, including William S. Kimball, a developer, and Nathaniel B. Browne, a Fidelity president who helped draw the University of Pennsylvania to West Philly in 1872.

Clark is believed to have financed still more projects through Centennial National Bank, which he founded in 1876 to help handle gate receipts and other workaday cash flows for the Centennial Exhibition — the nation’s biggest birthday party and Philadelphia’s coming-out to the world. The bank’s headquarters, across from the Pennsylvania Railroad station at 32nd and Market Streets, was designed by Frank Furness, who had served with Clarence’s younger brother during the Civil War. (The building serves today as Drexel University’s alumni center.)

“…to be known as Clarence H. Clark park”

The land that became Clark Park, today bounded by Baltimore Avenue and 43rd and 45th Streets, was long dominated by a fast-flowing creek. That changed in the 1800s, first when the ravine was dammed to power mills and feed an ice house, and later when the creek was buried in a gigantic pipe to unsully an otherwise orderly street grid. By the 1890s, the drained mill pond had become an ash pit and unofficial public dump.

Clark had obtained the land from Nathaniel Browne several years earlier, and faced a municipal tax assessment against the $16,925.35 (about $500,000 today) cost of paving the adjacent streets. In 1894, he proposed a novel arrangement for payment: swap land for taxes.

Clark wanted one condition on the deal. Thanks in large part to streetcars that had shortened commutes to factories and offices, and to developers like himself, the population of West Philadelphia had quadrupled since he had first moved there. With green space in dwindling supply, Clark added a codicil that the 9.1 acres were to be used in perpetuity as a municipal park dedicated to children.

All this was agreeable to the City Council, which on June 11 unanimously passed “An Ordinance to place on the public plan for park purposes a plot of ground in the Twenty-seventh Ward to be known as Clarence H. Clark park.” Some six months of landscaping followed, and the park’s northern section was duly dedicated on January 18, 1895. It took nearly another four years to open the section south of Chester Avenue; presumably, much time was spent cleaning the “bowl” — the old mill pond — of ash and trash.

Clark lived on for another decade, and continued his philanthropic pursuits. A longtime member of the Academy of Natural Sciences — the Western Hemisphere’s oldest natural science research institution — he funded its 1898 purchase of several hundred birds brought back from Alaska. His interest was more than purely scientific; his nephew had recently married a cousin of the explorer, Edward McIlhenny, whose father, as it happens, invented Tobasco sauce. (Today, ornithologists use the specimens to track environmental changes in the Arctic.)

Along with his brother Edward, Clarence helped establish the Penn Museum by funding early archeological expeditions to Sumeria. He later served as a director of the University of Pennsylvania’s archeology department, and in 1902, the brothers endowed the Clark Chair in Assyriology there.

Clark may even have had a hand in bringing to the park “Dickens and Little Nell,” the celebrated sculptural group by Francis Edwin Elwell; he sat on the artworks committee of the Fairmount Park Art Association, which purchased the bronze and set it up at 42nd and Chestnut in 1901.

Clarence Clark died in Philadelphia on Mar. 13, 1906. Having left his name on a park, a professorship, and a public library — and his mark on the city’s history — he had it inscribed on one more thing: his headstone in Woodlands Cemetery, half a mile from his namesake park.

Shakespeare In Clark Park’s 2007 production of Romeo and Juliet, the play that gave us “What’s in a name?” (Kyle Cassidy/Wikipedia)

This entry was posted in Philadelphia. Bookmark the permalink.